The theme of the 2018 conference is “Mirrored Resonances.” In part, it reflects a shared conference format shared between two institutions seeking to bridge a physical divide through technology. More importantly, it is designed to encourage expressions of human-computer interaction that exceed simply sharing audio-visual content. Similarly, the theme hints at the tighter integration among arts and sciences, music and engineering. We see the theme serving as the foundation for an integrative approach that will engage artists and engineers alike. 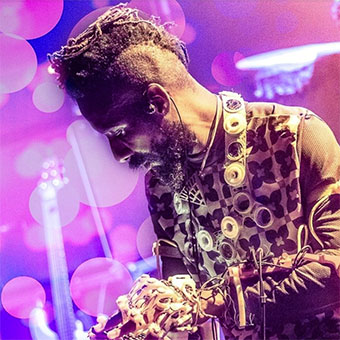 “ ‘Perfection’ is merely a significant point on an evolving process trajectory. This years ‘perfect’ is next years problem to solve.”-Onyx Ashanti
“There is no future. The future is a construct born of the perception of time as a linear construct with the ‘future’ as ‘where we are going’ and the ‘past’ being ‘where we have been’. A more interesting construct is that of the future as an attractor that pulls us toward it, with the past being an evolving knowledge base of non-linearly accesible experiential information. The circuit that makes these two constructs work, is “the now”. The present. The moment where time, space and body converge. Our current ‘now’, is exponential. So much so that its event horizon encompasses the future attractor., while parameterizing the past. Now, there is only the exponential now. The past and future are variables within it. To explore and create within the exponential now is to create the future and the past simultaneously and recursively.”
Since being introduced on the worldstage by way of a fortuitous TED talk he did in 2011 entitled “This is Beatjazz”, Mississippi native, Onyx Ashanti, has been evolving at a pace that surprises even him. Musician, Programmer, 3d print-designer, writer, performer, inventor…a self described child of the internet, and disciple of the open source philosophy, Onyx has spent the last few years creating a multidimensional expression concept called beatjazz.
Beatjazz is “beats” and “jazz”, or more specifically. Beats are electronically derived rhythm and jazz as improvisational sonic investigation create an improvisational sonic construct for investigating rhythm, harmony and melody interactively. This is expressed as sound and performance but also as projected visualization, light color sequencing, robotic parameter feedback and CAD design-multiple dimensions of a singular expression. A hyper expression. 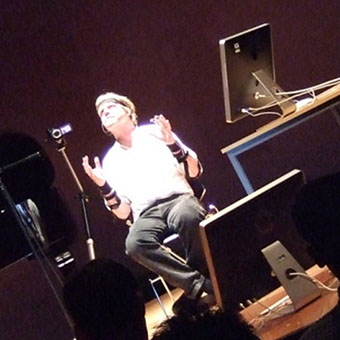 R. Benjamin Knapp is the Director of the Institute for Creativity, Arts, and Technology (ICAT) and Professor of Computer Science at Virginia Tech University. ICAT seeks to promote research and education at the nexus of art, design, engineering, and science. For more than 25 years, Knapp has been working to create meaningful links between human-computer interaction, universal design, and various forms of creativity. His research on human-computer interaction has focused on the development and design of user-interfaces and software that allow both composers and performers to augment the physical control of a musical instrument with direct sensory interaction. He has been a PI or co-PI on over $10,000,000 in government funded research grants, has authored or co-authored over 100 papers (including the foundational article on biomusic in Scientific American), holds eleven patents and was the co-inventor of the BioMuse system, which enabled artists to use gesture, cognition, and emotional state to interact with audio and video media. Over the years he has collaborated with composers such as Atau Tanaka and Eric Lyon to create a number of biomusical pieces performed around the world. His work has been discussed in popular media ranging from CNN to the Wall Street Journal to Omni Magazine. In previous positions, Knapp has served as a Fulbright Senior Specialist at University College, Dublin, and chief technology officer of the Technology Research for Independent Living Centre. While in Ireland he was on the faculty of the Sonic Arts Research Centre (SARC) and head of the Music, Sensors, and Emotion (MuSE) research group. As the director of technology at MOTO Development Group in San Francisco, Calif., he managed teams of engineers and designers developing human-computer interaction systems for companies such as Sony, Microsoft, and Logitech. He co-founded BioControl Systems, a company that developed mobile bioelectric measurement devices for artistic interaction. Knapp has also served as professor and chair of the Department of Computer, Information, and Systems Engineering at San Jose State University. He earned a doctorate and master’s degrees in electrical engineering from Stanford University and a bachelor’s degree in electrical engineering from North Carolina State University. 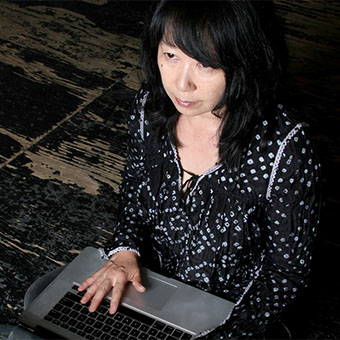 Ikue Mori moved from Tokyo to New York in 1977. She started playing drums and soon formed the seminal NO WAVE band DNA with Arto Lindsay. Since the 1990s she has collaborated with numerous musicians and artists throughout the US, Europe, and Asia, while continuing to produce and record her own music. Ikue won the Distinctive Award for Prix Ars Electronics Digital Music category in 1999 and shortly after started using laptop computer to expand her vocabulary not only playing sounds but create and control the visual work as well. Ikue received a grant from the Foundation for Contemporary Arts in 2006. Tate Modern commissioned Ikue to create a live sound track for screenings of Maya Deren’s silent films In 2007. In 2008 Ikue celebrated her 30th year in NY and performed at the Japan Society. Recent commissioners include the Montalvo Arts Center and SWR German radio program and Shajah Art foundation in UAE. Current working groups include new group OBELISK, MEPHISTA with Sylvie Courvoisier and Susie Ibarra, and various ensembles of John Zorn. 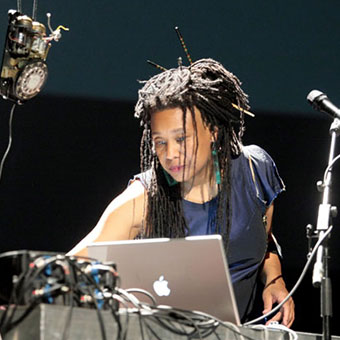 Pamela Z is a composer/performer and media artist who works primarily with voice, live electronic processing, sampled sound, and video. A pioneer of live digital looping techniques, she processes her voice in real time to create dense, complex sonic layers. Her solo works combine experimental extended vocal techniques, operatic bel canto, found objects, text, and sampled concrète sounds. She uses MAX MSP and Isadora software on a MacBook Pro along with custom MIDI controllers that allow her to manipulate sound and image with physical gestures. Her performances range in scale from small concerts in galleries to large-scale multi-media works in theaters and concert halls. In addition to her performance work, she has a growing body of inter-media gallery works including multi-channel sound and video installations.
Pamela Z has toured extensively throughout the United States, Europe, and Japan – performing in international festivals including Bang on a Can at Lincoln Center (New York); La Biennale di Venezia (Italy); the Interlink Festival (Japan); Other Minds (San Francisco); and Pina Bausch Tanztheater’s 25 Jahre Fest (Wuppertal, Germany). She has composed, recorded and performed original scores for choreographers and for film/video artists, and has done vocal work for other composers (including Charles Amirkhanian, Vijay Iyer, and Henry Brant).